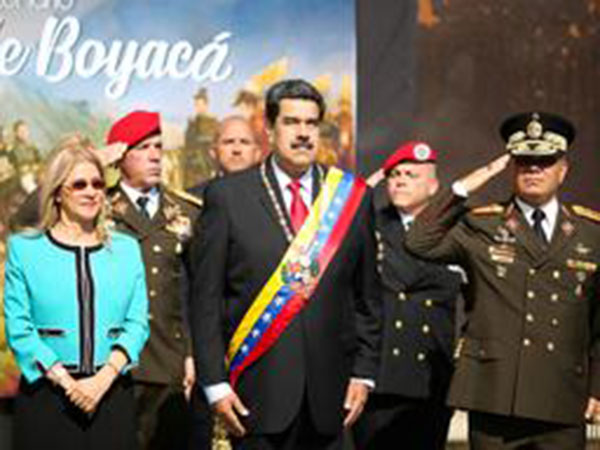 Wahsington [USA] August 18:Nicolas Maduro, an outspoken critic of the current US administration, has reportedly made somewhat unflattering parallels between President Donald Trump and the Nazi leader following the introduction of new crippling sanctions against Caracas.
Venezuela's embattled President Nicolas Maduro has compared his American counterpart Donald Trump's actions against the Latin American country to Adolf Hitler's persecution of Jews, El Periodico reported.
"They are doing to us, more or less, what the Nazis did to the peoples of Europe in the 1940s, what the Nazis did to the Jewish people, and I condemn it. Donald Trump is doing to Venezuela what Hitler did to the Jewish people - persecuting it, attacking it, blocking it", he said in a Caracas speech.
He has, however, added that he has a plan to fight the blockade imposed by the Trump administration, even though his Minister of Industries and National Protection Tareck El Aissami, who is being accused of drug trafficking in the US, is "the most persecuted by imperialism official" in his government.
Maduro continued by claiming that the US went after El Aissami because he had dealt a severe blow to international drug trafficking during his tenure as Venezuela's interior minister (2008-2012).
Last month, US Immigration and Customs Enforcement (ICE) added El Aissami to its list of 10 most wanted fugitives over drug trafficking allegations. He has described his blacklisting as "infamous aggression of imperialism".
This is not the first time that Maduro has compared the US President to the Nazi Führer: last November, he said, "Just like Hitler persecuted the Jewish people, Donald Trump persecutes the people of Venezuela".
Last week, the Venezuelan president called on his compatriots to join protests against the "hostile policies" of the Trump administration, and announced that he would submit a letter, signed by millions of Venezuelans, condemning US sanctions on Caracas, to the UN.
The United States introduced a new round of sanctions against Venezuela earlier this month, with National Security Adviser John Bolton saying that the penalties on Venezuelan state entities and individuals sent "a direct signal to all those who enable [Nicolas Maduro's] dictatorship and undermine the democratically elected national assembly, or interim president Juan Guaido".
"This sweeping executive order authorises the US government to identify, target and impose sanctions on any person who continues to provide support to the illegitimate regime of Nicolas Maduro", Bolton said.
The Venezuelan government denounced the sanctions as "another serious aggression by the Trump administration through arbitrary economic terrorism against the Venezuelan people".
Yet despite the restrictions, Maduro told US journalist Max Blumenthal on 7 August that there was still hope for dialogue with Washington, and that he had informed President Trump about his eagerness to engage in talks.
"I told President Trump that if one day - today, or in the future - there was an opportunity for a [mutually] respectful dialogue and understanding, I would be ready to offer a hand... God willing!"
Political Crisis in Venezuela
Venezuela has been mired in an ongoing political crisis since early January when Juan Guaido was elected the head of the opposition-led National Assembly that all other government branches have refused to recognise since 2016.
In mid-January, two days after the Venezuelan Supreme Court annulled his election, Guaido proclaimed himself interim president challenging legitimate President Maduro, who was sworn in for a second term on 10 January.
Guaido's move was immediately recognised by Washington, with other countries around the world following suit, while Maduro slammed the opposition leader as a US "puppet", and described the entire situation as a coup attempt staged by the United States.
Source: Sputnik

Hasina says CAA 'not necessary', but...

Alleged Threat to Former US Envoy...